On the Monkey Parade 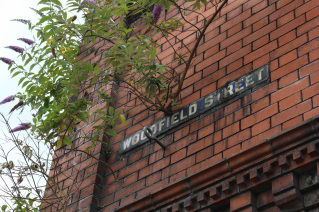 "F**k off back to monkey town and play with your nuts" spits the rotund Pontardawe Inn centre-forward, evidently displeased that we have managed to beat them for the first time in three seasons. For this unenlightened fellow, calling a Morristonian a 'monkey' is obviously intended to cause offence, when in fact the opposite is true. Born in the town's hospital in 1987[1], I spent my first eighteen years living in Morriston and still consider myself to be a Monkey first, Swansea Jack second. There is a certain pride associated with the moniker, a reason why it has been adopted as the informal nickname of many a sports team from the area.

My grandfather was born into the terraces of Tan-y-Lan[2] in 1927, briefly moving to houses on Pentrepoeth Road and Clyndu Street before making a return to the terrace with my grandmother and father in 1963, where he remained until the end of his days. During my last year of primary school, I interviewed him for a project entitled My Town, prompting him to recall being captivated by the blazing oil works during Swansea's three-night Blitz and flocking with other boys to see the engine-troubled RAF aircraft which had to make an impromptu stop in Morriston Park. However, one reminiscence was not so uncharacteristic of everyday life in the town: "On a Sunday, after church [we] would walk from the Cross, up to St. John's church, turn around, and walk back down...hoping to chat up the girls."[3]

The 'Monkey Parade', as it became known, was a chance for young Morristonians (already dressed in their best after attending the afternoon's church service) to wolf-whistle and cat-call to the opposite sex whilst parading up and down the town's Woodfield Street. A similar 'parade' was held on the same evening along Swansea's promenade, where youngsters prowled between Singleton Park and the slip bridge, and so the regular Sunday jaunt up Woodfield Street became known as the Monkey Parade, in order to differentiate it from its inner-city equivalent.[4] 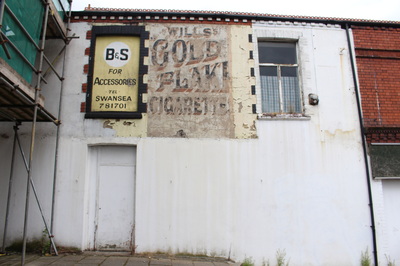 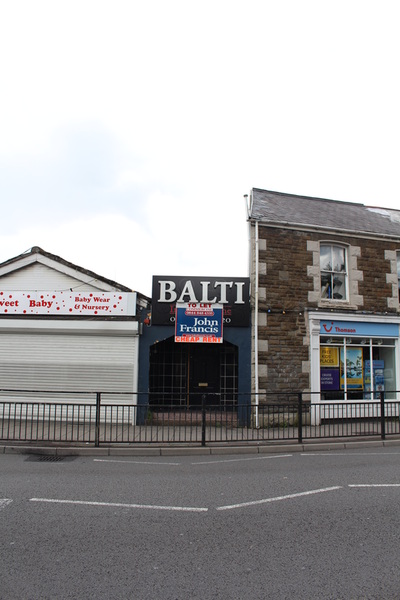 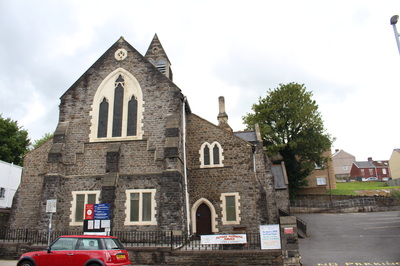 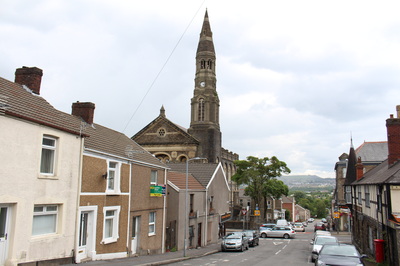 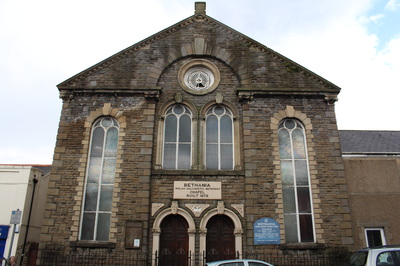 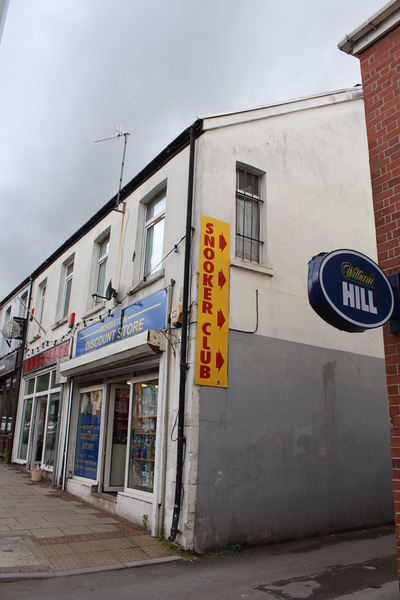 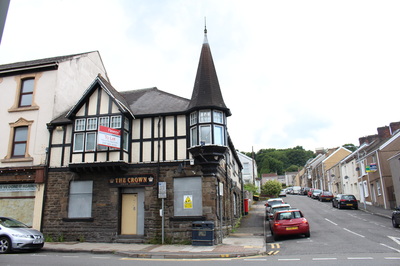 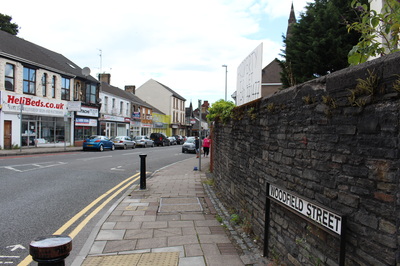 Exactly why people from Morriston were christened 'monkeys' is a question regularly asked but rarely answered correctly. Widely, and erroneously, believed to have originated from the time of the popular parade or simply because it was alliterative, the dub instead owes its beginnings to a member of the conifer genus, native only to Chile and west-central Argentina: Araucaria araucana (or to us dendrologic simpletons, the 'monkey puzzle' tree). Whilst walking through the gardens of Pencarrow country house in Cornwall, the sight of a fine young specimen of araucaria prompted one nineteenth century gent to proclaim, "It would puzzle a monkey to climb that!", or at least that is how the story goes.[5] 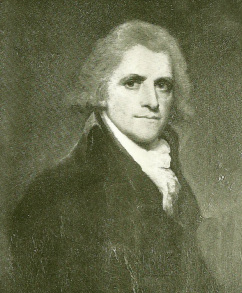 Sir John Morris (1745–1819)
However, the monkey puzzle tree is not the only link shared between Morriston and the faraway land of South America. A man named Robert Morris, one of the men who took over the Llangyfelach Copper Works[6] in 1727, left his son John his estate when he died in 1768. John Morris (later Sir John, following an 1806 knighthood) founded 'Morris Town' on the Western Bank of the River Tawe in the late eighteenth century; a place he hoped would be a more attractive environment for his workers to live in than his earlier creation of Y Castell, or Morris Castle[7], located above the heavy industry of Landore. Swansea's position as the world's leading copper producer in the eighteenth and nineteenth centuries saw copper ore imported from as far away as Chile, as it was more cost-effective to bring the ore from around the world to the coal of south Wales than the other way round. Morriston's initial cuttings of the Araucaria araucana genus were most likely brought over from South America with the copper and planted as ornamental features in the gardens of Morris Town's hierarchy[8]. The monkey puzzle would continue to be a visible part of the landscape until the early 1980s, when the last known tree in the area was cut down due to foundation issues. However, some Morristonians speculate that, hidden in a back garden somewhere along Penrice Street, one final araucaria remains – standing defiant against rot and redevelopment.[9]

To retrace the Monkey Parade today is to see first-hand what the age of huge supermarkets and out-of-town shopping has done to Britain's local independently-run shops. The arrival of Domino's Pizza in place of what was once Len Allchurch's[10] shoe shop and Subway where Alun and Ann Rees opened their first Allison Jayne[11] store is met with mixed feeling by the locals, most of whom sigh with disbelief at more fast-food outlets opening on the once commercially-diverse Woodfield Street. Others, it seems, are just happy that Morriston is now attracting a more upmarket brand of take-away. In recent years, Woodfield Street has become littered with hairdressers, charity shops and kebab houses – with businesses that display even the smallest ounce of imagination condemned to be just another flash in the pan. Now with Woolworths, an ever-present on Woodfield Street since 1935, destined to close their stores later this year, it seems no accident that the street's leading newsagents Good News[12] has this past year become simply News, the 'Good' dropped from the shop's frontage by its latest proprietors. 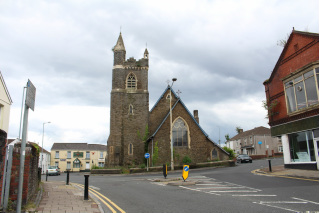 Morriston, much like Swansea, has often been the victim of short-sighted and merciless redevelopment. In the introduction to his second volume of Morriston's Pictorial Past (1994), André Scoville (1972–) makes a heartfelt plea to his fellow townspeople: "Morriston must change to create its history, but we must insist that it will enhance our town, not destroy it. The future of Morriston is in our hands..." The demolition of buildings such as the Bath Villas mansion house, Wychtree Street Hostelry[13], Horeb Chapel (which stood for 121 years) and Martin Street School (123 years) is both historically and aesthetically heartbreaking, reducing the once grand make-up of the area to something that will eventually only be able to be recalled with the aid of photographs.

The seemingly inevitable demolition of St. John's Church[14] would further rupture the town's link with its past, not only breaking a connection with industrial origins but also with the real story of Morriston, a rich and vibrant narrative which includes the tale of young men and women marching up Woodfield Street to the 'Church in the Middle of the Road', wolf-whistling and cat calling to each other, on the weekly Monkey Parade.

[1] I was one of the last babies to be born in Morriston Hospital, weighing in just before they closed the maternity ward at the end of the 1980s. Singleton Hospital is now Swansea's prime location for expectant mothers to pop their sprogs.

[2] Tan-y-Lan Terrace, previously Tan-y-Lan Road, is located at the southern tip of Vicarage Road. To the west is Parry Road, leading to Caemawr, and to the east is Clyndu Street, leading to Neath Road and then Plasmarl.

[4] When I wrote this article in 2008, there were very few online search results for the term 'Monkey Parade'. However, while completing some research in 2021, I found a number of later articles that suggested that weekly 'Monkey Parades' were held across Wales during the first half of the 20th century, with some recorded as far away as Birmingham, Manchester and Salford in England. So it seems likely to me now that the name 'Monkey Parade' was completely coincidental, and not derived from the nickname for people from Morriston after all (which, I'm sure you'll agree, is a shame).

[5] If a monkey did hazard climbing an Araucaria araucana, puzzlement would soon give way to painful injury. During its ancient past, the tree developed pointed leaves to stop grazing dinosaurs from eating it before it could grow out of their reach. In France, it is known, more accurately, as désespoir des singes, or 'monkeys' despair'.

[7] Morris Castle was a block of flats erected on a crag overlooking Landore, built by John Morris to house his workers. It provided housing for forty families, with some occupying these flats for more than 100 years. Two of the high outer walls still stand today.

[8] The factory owners who resided in Morriston's mansion houses, such as Bath Villas, and in the four-story town houses of Crown Street (many modern-day Morristonians recall there being monkey puzzle trees in the gardens of Crown Street).

[9] During a 2011 dérive (three years after this piece was written), Nigel Jenkins and I gleefully sighted Morriston's remaining Araucaria araucana towering high above the brow of Pentrepoeth Road. We then stumbled upon a much younger (but no less impressive) specimen in a front garden on Penrice Street. You can read more about this search for Morriston's last monkey puzzler in Nigel's Real Swansea Two.

[10] Len Allchurch (1933–), younger brother of Ivor (1929–1997), was part of the Welsh international football team who qualified for the 1958 World Cup (Wales's only World Cup appearance to date). After retiring from football, he was the proprietor of a sheepskin and shoe centre on Woodfield Street, where my mother took me each year to buy shoes for the new school year.

[11] Allison Jayne, a company founded on Woodfield Street in 1972, departed Morriston during the early 2000s. Morristonians wanting the store's elegant fashion and bridal wear now have to travel to Swansea city centre, or join the M4 motorway at junction 45 for a day trip to Cardiff or Bristol.

[12] Or Alan/Billy Hole's, as it is affectionately known (despite the fact that the Holes' relocated store on Woodfield Street never carried either of these names).

[13] Once used as a welcoming point for all gentry travelling to Swansea by stagecoach, the 72-roomed building was demolished in 1960.

[14] St. John's Church was originally built using wood in 1789 by the town's founder John Morris. It was rebuilt with stone in 1857, although the two towers were added later. Affectionately known as 'The Church in the Middle of The Road', St. John's has been the focal point of central Morriston for over 200 years, now serving as a busy roundabout. A local legend suggests that if the Church of St. John's time came to an end in Church Square (the site of the modern-day roundabout) then the River Tawe would cease to flow.