A Mis-Spent Hour in Poitiers

Written following a 2008 visit to a friend who was teaching English in southwestern France. 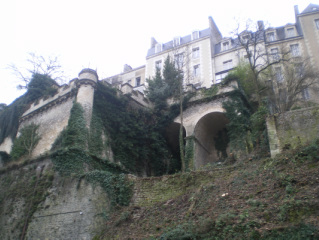 "You owe me four Euros" he says. I give them to him, and he leaps from the taxi on to the lips of his waiting girlfriend. We fought the urge to small-talk, briefly comparing our inadequate grasp of the French language as our cab eased down the hill from the airport into the town. Walking toward the entrance of the train station, I throw up a thumb and shout "Cheers", but the half-hour we shared is barely acknowledged. I thought he would have at least offered his name as a parting gift.

There is not a train to my final destination of Saintes for three hours, although the first hour passes quite quickly, as I remember to set my watch to Central European Time. Returning outside, I review my short-term surroundings. Pointing across the street, toward affluent architecture atop a lofty moss-layered wall, the signposts confirm what I had already feared: the Centre Ville lies elsewhere. With two hours to spare, I decide to find it. Finishing my bottle of water, thinking it best to put it in the hands of a nearby rubbish bin rather than carry it in my own any longer, I head back into the station in search of a toilet. 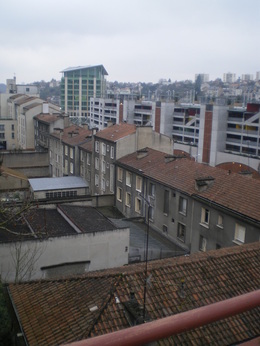 The universal 'WC' sign leads me down a lonely corridor to a heavily locked door. The sign bolted onto it holds no language barrier either – it will cost me €1 to unlock it. Begrudgingly, I place five 20c coins in the slot. Nothing happens. An angry looking Frenchman rounds the corner, and throws a few words in my direction.

He shrugs and places a note in the change machine. Not wanting to seem like I'm the type to hang around toilets without using them, I leave him to it. The clatter of the re-locking door echoes along the corridor as I make my way back up to the station's entrance.

Outside, I scan the street for toilettes, but there are none to be seen. An attentive motorist brings to my attention that I am standing in the middle of the road, and so with the ring of his car horn still resonant, I hurry toward the lofty moss-layered wall. Turning past a dimly-lit boulangerie on the corner, I cross another road and rush up steps leading to the affluent architecture above, cursing my decision to finish that bottle of water. The need for relief is now becoming a main concern.

Red-roofed terraces, unevenly stained by railway track grunge, solemnly turn their backs to the finery of the scene atop the wall, one I have now become a part of. Momentarily postponing my search for a bog, I sit down next to a statue to take in the view. Rusted oil freight cars silently line the unused track on one side of the valley, sleeping their way into the distance where the railway lines disappear around the curve. A water-tower rises above a greasy green canal, the name of the town emblazoned upon its crusty white surface. Without warning, a passenger train is zealously thrust from the station and shot between the hills like a bagatelle marble. Vanishing further into the valley, the echoes of its egress find their way back along the track. Then, it is forgotten. 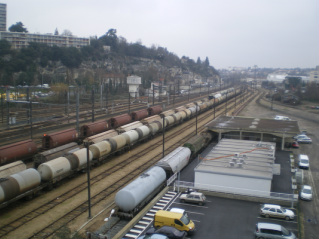 My bladder offers a numbing pang as a reminder of what needs to be done, and so the quest for the Centre Ville is replaced by what will now need to be a hasty hunt for a lavatory. Making a descent back down along the side of the road rather than the steps, a cat invites me to follow it over iron railings toward some bushes. A welcome suggestion, but they are too visible from the street. I don’t want to be arrested having only been in the county just a few minutes less than an hour (or at all, for that matter). With no public toilet in sight, I admit defeat and head back down to the train station to feed the heavily locked door coins until it lets me in.

Turning past the boulangerie on the corner once more, my marathon becomes a sprint and I leg it into the station, whipping my wallet out of my jean pocket as I reach the home stretch. At the end of the corridor, I realise I don't have any coins and so place a €5 note into the change machine. Into the tray rattle four coins, and a token.

Postscript: The first words that my English-teaching friend said when I told him this story later that evening: "You know it's perfectly legal to piss in the street in France, don't you?"